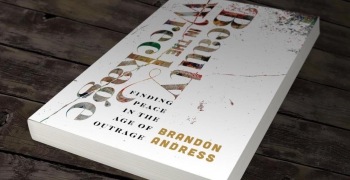 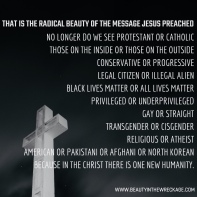 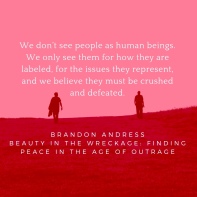 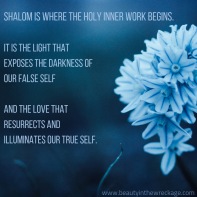 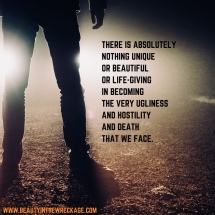 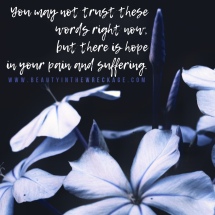 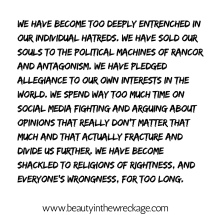 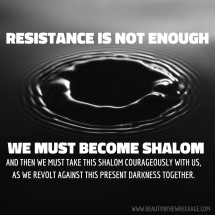 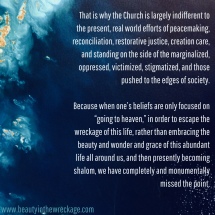 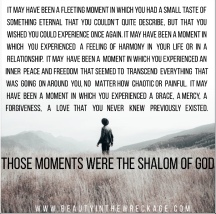 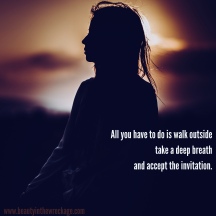 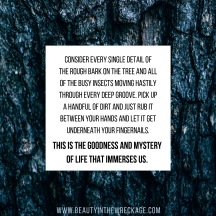 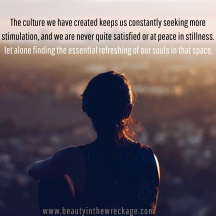 To say that this year has been difficult is a woeful understatement. It has been seven long and painful months since Abbott died tragically on an unseasonably warm and inviting February night.

The devastating impact of his death, while reverberating deeply within our town on so many levels, knocked our smaller community back on our heels and then to our knees. Our house church, of which Abbott and his family have been an integral part over the last decade, is still completely broken.

But each week, we gather back together and hold each other and try to pick up the fragmented pieces as best we can.

How does a person even take a step forward in so much pain and suffering?

How does a group of friends walk through this pain and suffering together?

How do people hold one another in woundedness, in anger, in frustration, and in doubt?

This is all new territory.

I have to admit, for as often as I believe that I have the right words to say, the right perspective to offer, or the appropriate wisdom to counsel, I have realized that I have absolutely nothing that can remedy or alleviate the pain, or the heart ache. It is a place I rarely find myself. A place of complete helplessness.

And then, there are all of the impossibly difficult faith questions about the purpose of life, why we are here, what this life is all about, and then God’s seeming distance and indifference toward our lives in the pain and suffering.

Last year, reflecting on suffering, I wrote the following words, not knowing how prescient and true they would be for me and my friends, as we walk together in our collective grief.

“Suffering breaks us down into insufferable little parts where we can either self-destruct or cry out helplessly to God, because we are in a place where we have seemingly lost all control. Our sense of self has been shattered. Our identity has been obliterated. And it is in our place of pain through suffering where we can choose whether we make it our final destination or a transformative passageway.

That is the profound mystery of suffering.

Suffering strips away any and all control we believed we have had over people and situations. And it is in this place, our place of pain through suffering, the place where we have lost all control, where our hearts and minds can either be closed off or opened to the healing and transformative love of God.”

But it is a place where the choice doesn’t seem so easy. It’s a place where one can easily be pushed to the end of faith. It is a place where it seems like the most logical conclusion is to wash our hands of a God who has abandoned us in our sufferings, who has left us lost and alone.

That is the place where my friend Jackie, Abbott’s mom, was a couple of months ago, as she was preparing for a backpacking trip to the Pacific Northwest with a couple of her friends.

While she did not share with us everything she was thinking as the trip approached, one thing she did share was that she needed to go out into nature and just breathe and decompress and find peace and stillness. Unbeknownst to us, she was also giving God her pain and asking for a sign to know that God is with her in this place of pain, to know that God has not abandoned her.

Being that she was going to be in one of the most rainy regions of the United States, she simply asked God to give her a rainbow as a sign that she is not alone and that God is with her in this.

On the last rainy evening, utterly dejected, not having seen a rainbow over the three previous days, Jackie said that she “had words with God,” and that, in her brokenness, she was “washing her hands of God.”

She poured out her heart and soul to God in agony. She broke herself open in real and raw emotion to God by saying, “I have lost my son and I am broken and in so much pain… and the least you could do is give me a sign that you are with me in this. But you can’t even do that. I am (expletive) done with you.”

The next morning, as the sun came up against a promising blue morning sky, the ladies broke camp and were met by a husband and wife team who would be shuttling them back to the ferry. They loaded their gear into the flatbed truck and took their spots amongst the gear.

As the truck barreled down the road, Jackie, who had recently gotten a couple of tattoos after Abbott died, noticed that the lady in the passenger seat had a tattoo on her forearm, but couldn’t quite make out what is was or what it said. It wasn’t long before the truck drove onto the ferry for the short ride out of the National Park.

As they reached the other side and began to unload their gear, the man, whom they affectionately referred to as “Standing Rock,” because of his imposing stature, and his wife got out of the truck and joined the ladies at the back of the truck to help with the gear.

Jackie noticed that Standing Rock had a tattoo of baby’s foot on the back of his leg with a date just below the tattoo.

It was Abbott’s birthday.

Shocked and taken aback that he had a tattoo with Abbott’s exact birth date on his leg, Jackie pointed it out to her friends.

Among the surprise and chatter, Standing Rock’s wife explained that their newborn baby boy died on that date, so they each got a tattoo to commemorate his life. Moved by their story of loss, Jackie told them that Abbott died four months earlier and the date of their tattoos was Abbott’s birthday.

And that’s when the lady walked up to Jackie and turned her arm over to show Jackie her tattoo. 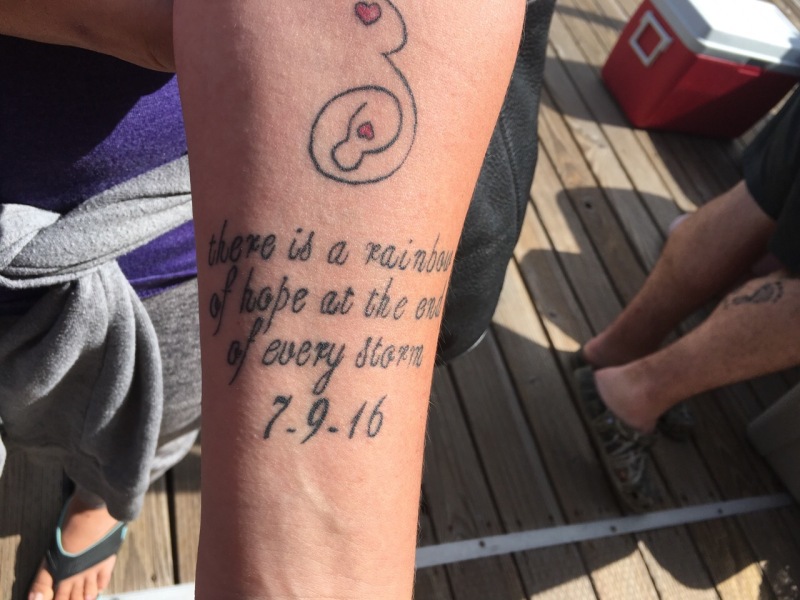 There are just no words.

The rainbow.
The date.
The promise.

I have to admit that I don’t fully understand this life, or why it has to be so full of tragedy, pain, and loss. Further, I don’t understand the mysteries of God or how all of this will fully resolve as one of the greatest stories ever told.

I really don’t.
But I do know this.

Even in our darkest hour, God does not leave us, does not abandon us.

God’s love and compassion, amidst the pain and suffering, still surrounds us and holds us.

7 thoughts on “Washing My Hands of God”