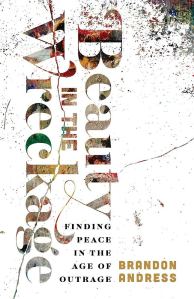 This series must be read in order. Start with HELL 1 here.

I remember watching the Christmas classic Home Alone for the first time when I was about seventeen years old. If you haven’t seen this movie, it is about an extended family rushing to leave for a Christmas vacation, but through the rush of the early morning chaos, they accidentally leave eight-year old Kevin at home.

Running through the early part of the movie was a rumor in which Kevin believed that a scary-looking, bearded, old man named Marley had murdered his family and half the neighborhood with a snow shovel and was storing them in garbage cans full of salt. Marley was known by those who heard the rumors as the “South Bend Shovel Slayer.”

And as you can imagine, while Kevin was trying to overcome his fear of being left at home alone, he had a couple of encounters with old man Marley that further terrified him, not least of which was their encounter at a church service on Christmas Eve.

Although petrified upon facing the old man, Kevin discovered from Marley that all of the rumors and mischaracterizations about him were untrue. Not only was he at the church that night to watch his granddaughter sing, he was also secretly hoping to reconcile a broken relationship with his son. In one of the most revealing lines of the movie, Marley tells Kevin, “You don’t have to be afraid. There’s a lot of things going around about me, but none of it’s true.”

I’m not much for movie examples like this, but it could not be any more perfect in the way that it captures how the majority of Christians misconstrue God as a violent and retributive deity, while God is really a god of peace and love and wants to reconcile with every child.

Like old man Marley, people have formulated ideas about God and what God must be like. One could say that, “There’s a lot going around about God, but none of it’s true.”

I recently asked a few dozen of my Christian and post-Christian friends how they have always understood “God’s wrath.”

Taken together, their responses described a schizophrenic deity that sometimes loves people so much that he would be willing to die for them, but then at other times, a deity that views people, especially non-Christians, as objects of impending vengeance and destruction who he dangles over a chasm of hell-fire for simply existing, or for not loving him back the right way.

It’s the open-armed God of love and restoration inviting us into a relationship of shalom, but whose dark side, the wild-eyed and vindictive god of retribution, is always around the corner ready to bash in our skulls if we step out of line.

And just so you don’t think I am over dramatizing the bloodthirsty monster god motif, Brian Jones writes in his book Hell is Real (But I Hate to Admit It):

Jesus rescued you from falling into the hands of Someone larger than your mind can conceive, stronger than the combined strength of a trillion nuclear explosions, a holy God destined to unload the complete, unrestrained force of His wrath on you for offending His holy nature.

Hell isn’t your friend’s biggest problem; God is. Hell is simply the end result of God’s justified wrath. It’s the final permanent expression of his anger towards those who have purposely chosen to reject His lordship over their lives.

There is no other way to say it, but this mindset is sick and twisted and sadistic.

And it is heartbreaking how a God described by Jesus as love-essence and who was enfleshed so beautifully in Jesus, has been reconstituted into a distorted and monstrous deity that hates us so much and thinks so little of us that the only thing that would satisfy his wrath and keep his “holiness” intact is to “violently torture his son his on a cross.”

But even if your image of God is not quite so horrific and contorted, you may still be wondering how God is going to deal with serial killers, sex traffickers, genocidal maniacs, perpetuators of systemic enslavement and oppression, rejectors of God, and the like.

These people deserve God’s wrath for the way they have shaken their defiant fists at God and hurt other people along the way, right?

I guess it depends on what the word “wrath” actually means and then toward what end we are ultimately moving.

I submit that the word “wrath” isn’t “like a trillion nuclear explosions” unloading God’s fury and rage on the unrepentant. Even more, I submit that the end toward which we are moving with God is not retributive in nature, but rather restorative.

Let’s start with the Greek words for wrath.

There are only two words in Greek that have been translated as wrath in the New Testament. They are orgē and thumos and neither mean anything close to the meanings we now associate with God’s wrath.

Understanding each word will be absolutely essential as we look at parables and other passages throughout the New Testament that mention God’s wrath.

Orgē, which is translated as wrath throughout the New Testament, means a settled anger.

It is not explosive rage or vengeance. It is not hostile or retributive.

Orgē “proceeds from an internal disposition that steadfastly opposes someone or something based on extended personal exposure.” (Source: HELPS Word-Studies, Gary Hill)

In other words, as a person exists in relational disunion (sin) with God, and then continually lives out of that disunion by perpetuating wrongdoing and injustice (sin), it angers God.

But it is a settled and controlled anger.

God longs for all of creation to exist in shalom, for each of us to live in oneness and wholeness with God, within ourselves, and with others. However, when a person rejects this freedom and love in God and then goes on to abuse others and perpetuate injustice, it angers God.

But it has nothing to do with an outburst of rage, vengeance, or retribution toward anyone.

It is an anger, but again, it is settled and controlled and fixed.

The other Greek word, which is also translated as fury or wrath and which is now my favorite Greek word ever, is thumos.

Despite what your Greek translation books state, thumos is an ambiguous word that is difficult to translate. It is better translated as “spiritedness” than “wrath.” (Classical Wisdom)

Plato used an allegory to demonstrate this spiritedness in which two horses, one black and one white, steer a chariot. The dark horse represented man’s desires, which can be chaotic and lawless. The white horse represented the spiritedness of thumos, which can be noble, courageous, and heroic. The idea was that when both horses are in balance the charioteer can successfully navigate the chariot.

To take this idea of thumos further, it is one’s passion that can manifest in a variety of emotions, from love to joy and from grief to anger. The key is how the thumos is harnessed. Plato suggested that the spirited energy and passion of thumos can be guided either toward negative or positive ends. But when directed positively, it can be guided in beauty, truth, and goodness. And on that positive end, thumos stands up for what is right, is ready to defend what is good and right, and is even willing to sacrifice itself when opposed, surrounded, and ready to be killed.

This is why it is dangerous to flatly translate thumos as anger or wrath. Because in verses attributed to human beings, thumos may very well mean anger or wrath, as the black horse of chaos and lawlessness overrides that which works toward beauty, truth, and goodness.

But when thumos is applied to God in Jesus, it is a spiritedness and passion to stand up against injustice and lawlessness. It is the deep resolve to defend the cause of the weak, the outcast, the downtrodden, the marginalized, the victimized, and the oppressed. It is the passion to sacrifice, even to the point of death, for beauty, truth, and goodness to flourish for all.

And I don’t think it is any coincidence that when thumos (thymou) is mentioned in Revelation 19, it is Jesus who rides in on a white horse named Faithful and True. Yes, the white horse motif not only captures all of the cultural nobility of the time, but in light of our discussion on the spiritedness and passion of Plato’s white horse, it captures so much more.

For it is Jesus, in his passion, who stands up against the oppositional forces in honor, not to wage a retributive war against evil, but to sacrifice himself in order to demonstrate that it is love, not vengeance, which is victorious.

It is Jesus whose robe is described as sprinkled in blood (his own blood) before the battle even began. It is Jesus who tramples the winepress of his own passion. It is Jesus whose sword is the truth of all that is good and righteous and pierces the hearts of all mankind. And it is Jesus and his kingdom of love that prevails and will shepherd all people justly.

Had the New Testament writers wanted to use a Greek word that implies supernatural anger and rancor and the “ultimate sanction against taboo behaviors,” they would have chosen a word like mênis.

They used orgē and thumos.

God’s orgē is settled and controlled and solidified against those who reject the life found in God and who perpetuate injustice. But it is the spirited passion of God that stands in truth and love against injustice and lawlessness and that consumes like a refiner’s fire so only beauty, truth, and goodness remain.

In HELL 7 we will explore Romans 9, the parable of Lazarus, and the parable of the unmerciful servant that discuss God’s wrath in order to determine if God is working toward a retributive and punitive end or a restorative end.